Anton Kusters began the Blue Skies Project in response to the death of his grandfather and a mysterious story of his World War II experience. Living in a small village in occupied Belgium in 1943, he escaped arrest by the SS and possible detention in one of the German concentration camps.

Kusters’ grandfather was not jewish, but in thinking about what might have happened, Kusters spent the next five years researching and travelling to all the known camps run by Nazi Germany.

Documenting the Holocaust has provided many artists with moral and aesthetic difficulties. How to capture the enormity of such an extreme and incomprehensible act is beyond immediate representation.

Kusters turned his camera away from the earth and archaeological remains and photographed the blue sky above each of the camps he found. The result is a collection of 1078 polaroid prints, blind-stamped with identification numbers and GPS co-ordinates, representing the paradox of the sky as a witness to the atrocities that happened beneath it.

The photographs are an exploration of an already fading memory, and sit between the fragments of evidence and the abstracted trace in a space opened for reflection. 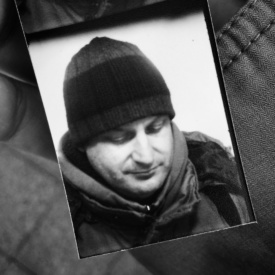