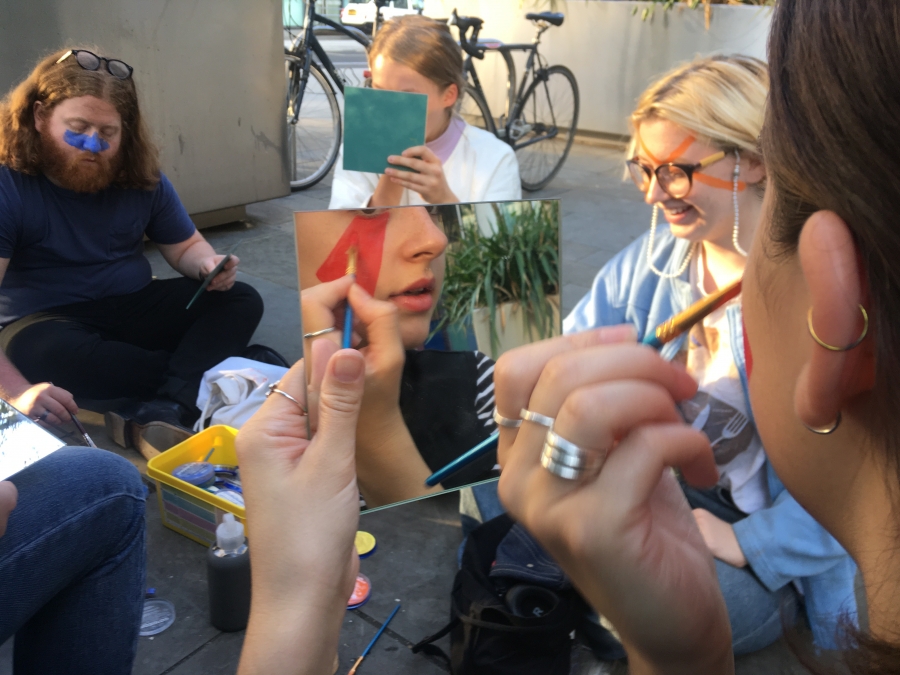 A virtual walk with the Dazzle Club

A virtual walk with the Dazzle Club

Dazzle Club explore being watched and seen in the twenty-first century city in this online event.

Paint your face with household materials and walk the pixelated public spaces of Derby with The Dazzle Club. A Derby Dazzle prompts an embodied enquiry into the public sphere, autonomy and visibility. In times of pandemic as the distance between our bodies has increased, the cameras have moved closer. Readings and discussion will report new developments in watching technologies and share strategies of resistance to increasing surveillance.

All participants are asked to have their cameras on for the duration of the event.

The Dazzle Club is a collaboration between four artists, Georgina Rowlands, Emily Roderick, Evie Price and Anna Hart, exploring surveillance in public space. It began in August 2019 in response to the forced admission that facial recognition technology was being used by developer Argent on the King’s Cross Estate in London, a place in which we have all made art for many years.

As citizens of a heavily surveilled city, third only to Taiyuan and Wuxi, China, in density of cameras per resident, we make monthly artist-led silent walks with participants wearing CV Dazzle, alongside moving image and internet interventions. We seek to draw awareness to technological bias and contested data collection, and to build new expressions of trust.

Our embodied research has been featured widely in national and international media including Vogue, Reuters, BBC, I-D, and The Observer. Recent exhibitions/events include Screen Walks with Photographers’ Gallery and Fotomuseum Winterthur, MASCARAS at Galeria Municipal do Porto, !!!Sección Arte, Cuba.