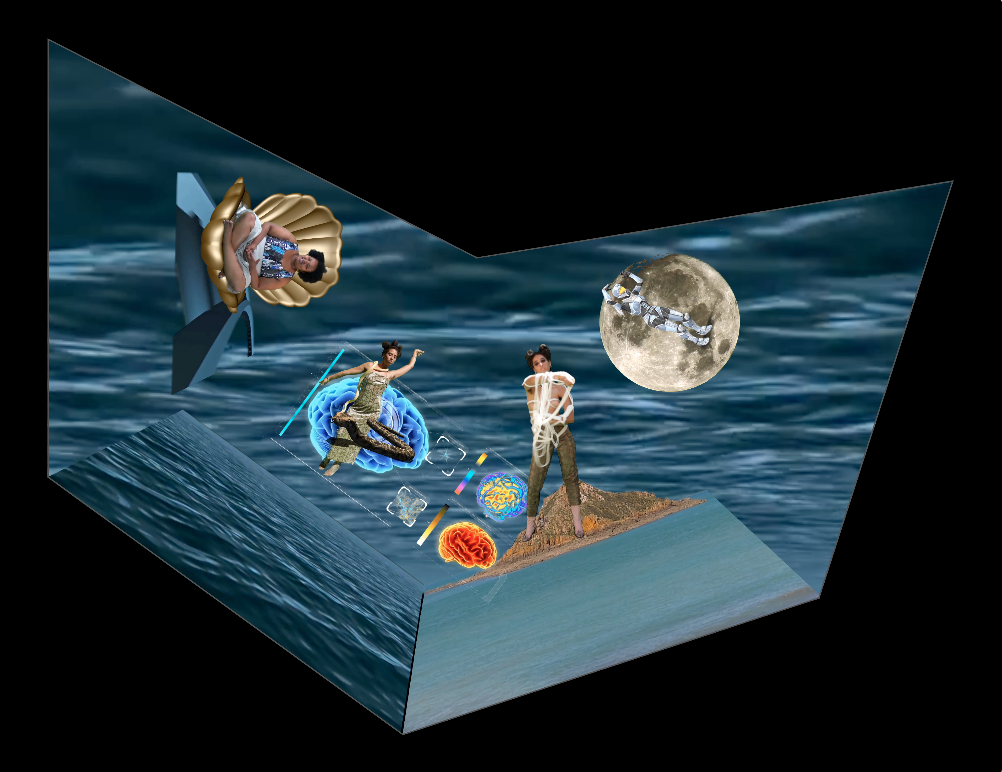 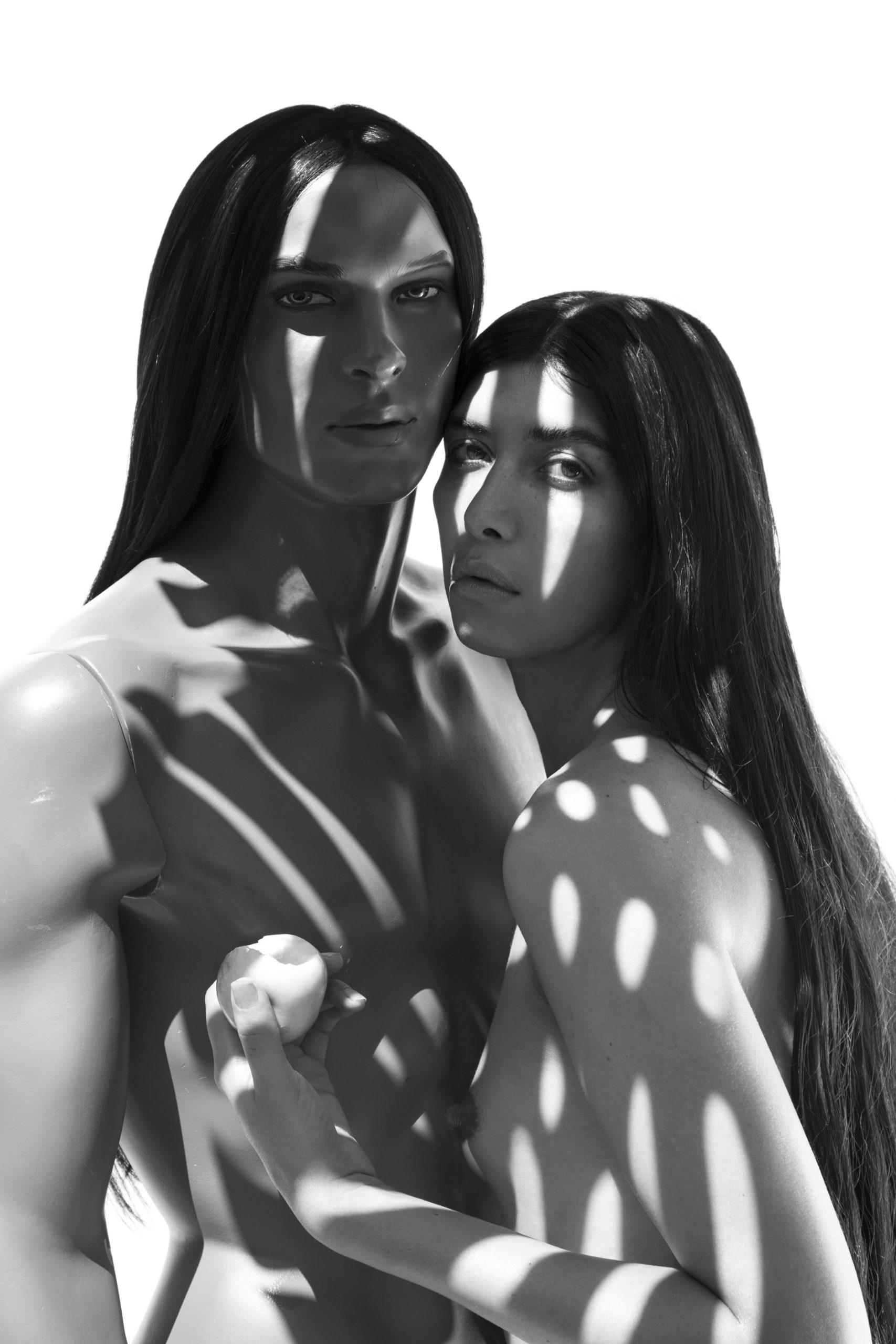 Through the artworks of three multidisciplinary artists – Tabita Rezaire, Juliana Huxtable and Martine Gutierrez, the exhibition Matrix — fluid bodies, unlimited thoughts, curated by Marina Paulenka, examines the body as open to the possibility of control.

Society, culture, environment, politics, science and technology as disciplinary practices but also as the driving force of the self, all have different impacts on the control of our bodies. Our experiences make us reconsider the idea that our bodies are closed units. As technology enables the production of the virtual [perfect] body, the traditional points of feminist critique become increasingly difficult. We are left to question what and whose body is it, how does it perform, and what is our relationship to these virtual images and the way they are presented.

Paul B. Preciado says that there is no such thing as a gender without technology. Our bodies are both spaces of political control and centres of agency and resistance and they are subject to relentless, fast de-territorialisation and re-territorialisation.[1] More than machines and digital network, technology as disciplinary practices both subject us and produce us as subjects. [2]

The body is a social and cultural tool and the right to define what a body is, has never been made an equal right. According to Legacy Russell, gender is a scaled economy, a way of regulation, management and control. It allows for the reification of process, the division of labour, and the exchange of value under the umbrella of capitalism. [3]

Our individual bodies function like the expansion of global communication technologies. We are networked more than ever with many opportunities for mutual contact and information exchange. Our digital world has become not only an empowering secure space but also enables a growing visibility of marginalized groups via online portals. Our experiences in the real and virtual domains and at their point of intersection, shows that cyberspace is not a pattern or place for itself, separate from our real life, but affects how we see or experience our environment.

The three artists in this exhibition – Tabita Rezaire, Juliana Huxtable and Martine Gutierrez share a common interest in exploring gender fluidity by using their bodies and identity as their primary subject, within a mostly online space as a place to re-present and re-perform personal gender identities. Generationally equal, all three artists are dealing with these topics from different perspectives and experiences as they play with the concept of gender roles from the perspective of social and media representation.

Their work uses their own life experience as a point of departure, transforming physical and virtual space, as they are transformed into avatars, muses, performers, infinity incarnated into an agent of healing.[4]

The way Tabita Rezaire explains her practice and understanding of technology is insightfully connected with healing and colonialism. For her, the architecture of cyberspace is a very discriminatory, isolating and sanctioning platform. The binary ideology is woven into the fabric of our social, cultural and political territories, which she examines in the work Ultra Wet – Recapitulation. Her work, through image, language, form and movement, unites body, mind and spirit, asking us to confront difficult questions about the body, sexuality, gender and technology and the Internet. Through all her videoworks she endeavors to find cues, strategies and ways of connecting. The performance works – offerings – put into practice the research that her videos contain, in response to a desire for a more tangible connection.

Sugar Walls Teardom is an installation consisting of a gynecology chair with a mechanical arm where one could sit and watch a video. It directly references the female form and is very politically charged: it reveals the contributions of Black womxn’s wombs to the advancement of modern medical science and technology; central to the biomedical economy. During slavery, Black womxn’s bodies were used and abused as commodities for laborious work in plantations, sexual slavery, reproductive exploitation and medical experiments. Biological warfare against Black womxn is still pervasive in today’s pharmaceutical industry.

The lines between different forms of Juliana Huxtable’s work are often fluid. Using a diverse set of means to engage issues such as race, gender, queerness and identity, including self-portraiture, text-based prints, performance, nightlife, music, writing, and social media. Huxtable, as an author and subject, by referencing her own body and history, as she examines socio-political issues.

Despite some existentialist threads in her thinking, her body, experience and her structural position in the world influences what she understands to be truth as much as the structures that she is given. Huxtable is using fantasy as a way to make a metaphor of something that is already there. Her body is not something isolated and separate from the larger questions of fantasy, history and performance, the body is the avatar; and the avatar is as much in the data fields as the system it has come to represent – it is an always-changing story.6

In that sense, Infertility Industrial Complex: Snatch the Calf Back, represents an era in which so many things are being read through the context of visibility and liberations of certain groups.  Drawing on ideas of genetic modification, fetish, and zoophilia while critiquing industrial farming, this artwork is about visibility economy and identity politics and about taking over-performing humanness to its limit.  Looking at the work we can see how she uses symbolism to express the exploitation of female sexuality. A woman, pinned down to a fence and being forcefully milked is raising many questions of ethics, dairy and meat industry. It makes the viewer contemplate elements of consent, not only in the case of women but also animals.

Martine Gutierrez explores gender, sexuality, race and class, as well as conventional ideals of beauty and identity. Acting as subject and producer, the artist creates photographs, music, billboard campaigns, films, performances, and satirical ads that juxtapose the consumable with the genuine. Interested in the ambiguous fluidity of relationships and the role of  genders, her video works combine costume, photography and film.  Gutierrez produces complex narrative scenes that use the symbolism of pop culture to reveal (gender) identity as a social construct.

Gutierrez accompanies each film, which documents her transformative performance, with her own original music. While in her never-before-shown film work Hear she sings “I’m alone, I don’t need your love anymore …”, while she walks alone on a beautiful sunny day watching people sitting in the grass and exchanging love, touches and kisses. Recorded almost in a guerrilla style in Chile on Valentine’s Day, the film exposes the variety of love in different types of relationships.

Gutierrez produced Indigenous Woman, an artist book in a popular glossy magazine format focussed on the subversion of white, western standards of beauty. Filled with beauty ads, fashion spreads and a letter from the editor—all featuring Gutierrez herself as model, stylist, photographer, writer, and editor. Some works parody fetishised representations of ethnic identity, while the Body En Thrall series consists of large black and white prints in which Gutierrez appears surrounded by mannequins, which have fascinated her since high school. In her recent body of work, China Doll, Gutierrez once again plays the titular role which is the mirror, a counterpart to Indigenous Woman – she is a blonde woman now, an avatar, the epitome of femininity and the product of Hollywood’s highest ideals. [7]

In this exhibition, curated for FORMAT21, the artists, Rezaire, Huxtable and Gutierrez, share and resist the limitations of predetermined understanding through the transformation of physical space and composed-self. By investigating the body and identity—both personal and collective — they demonstrate how our (techno) bodies can blur stereotypical boundaries, challenge media representations and breakdown the structures that are intended to control us. 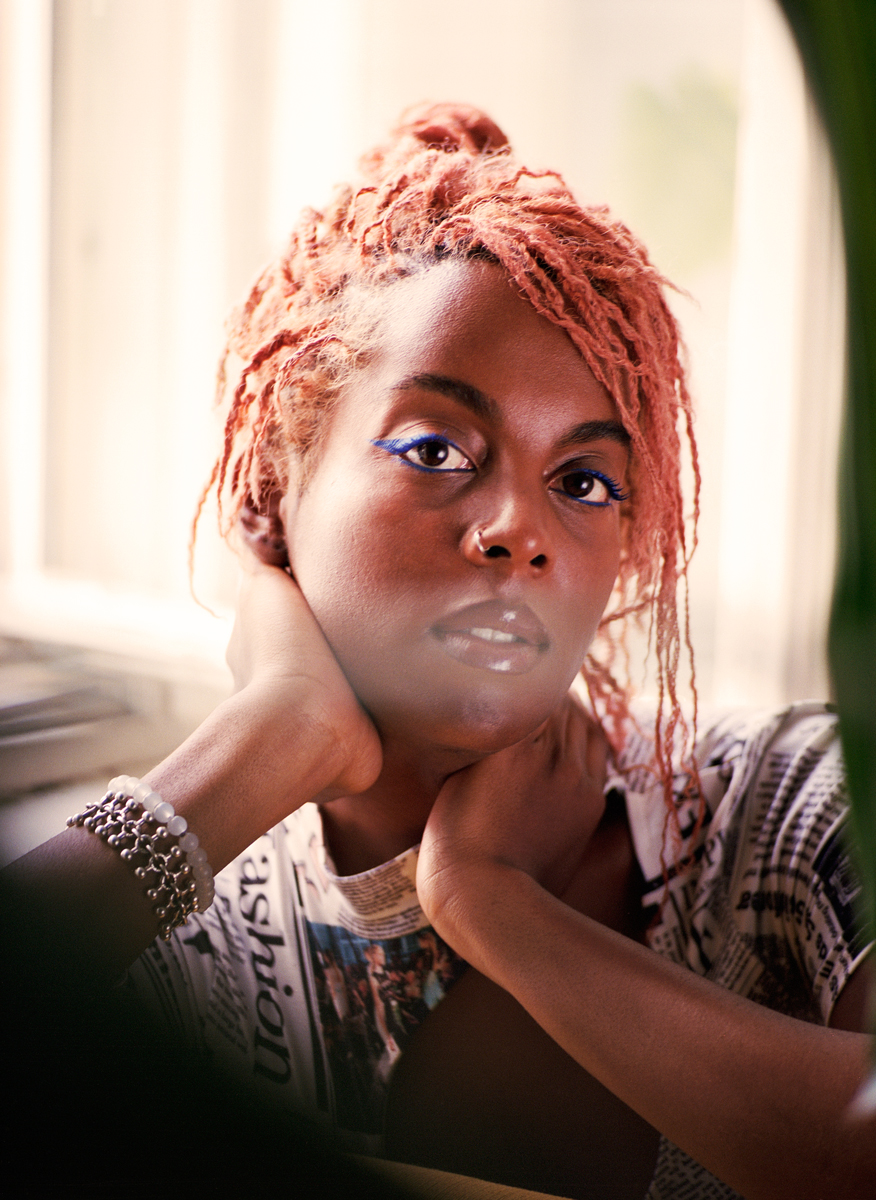 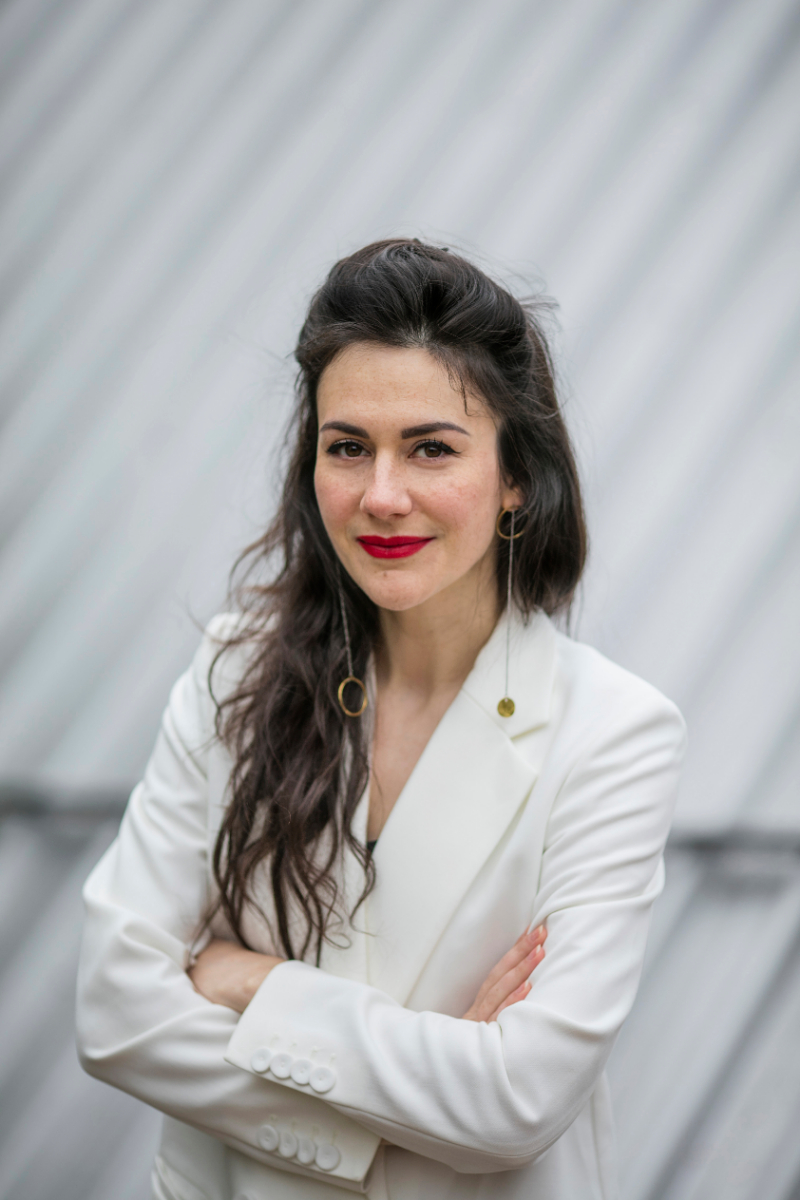 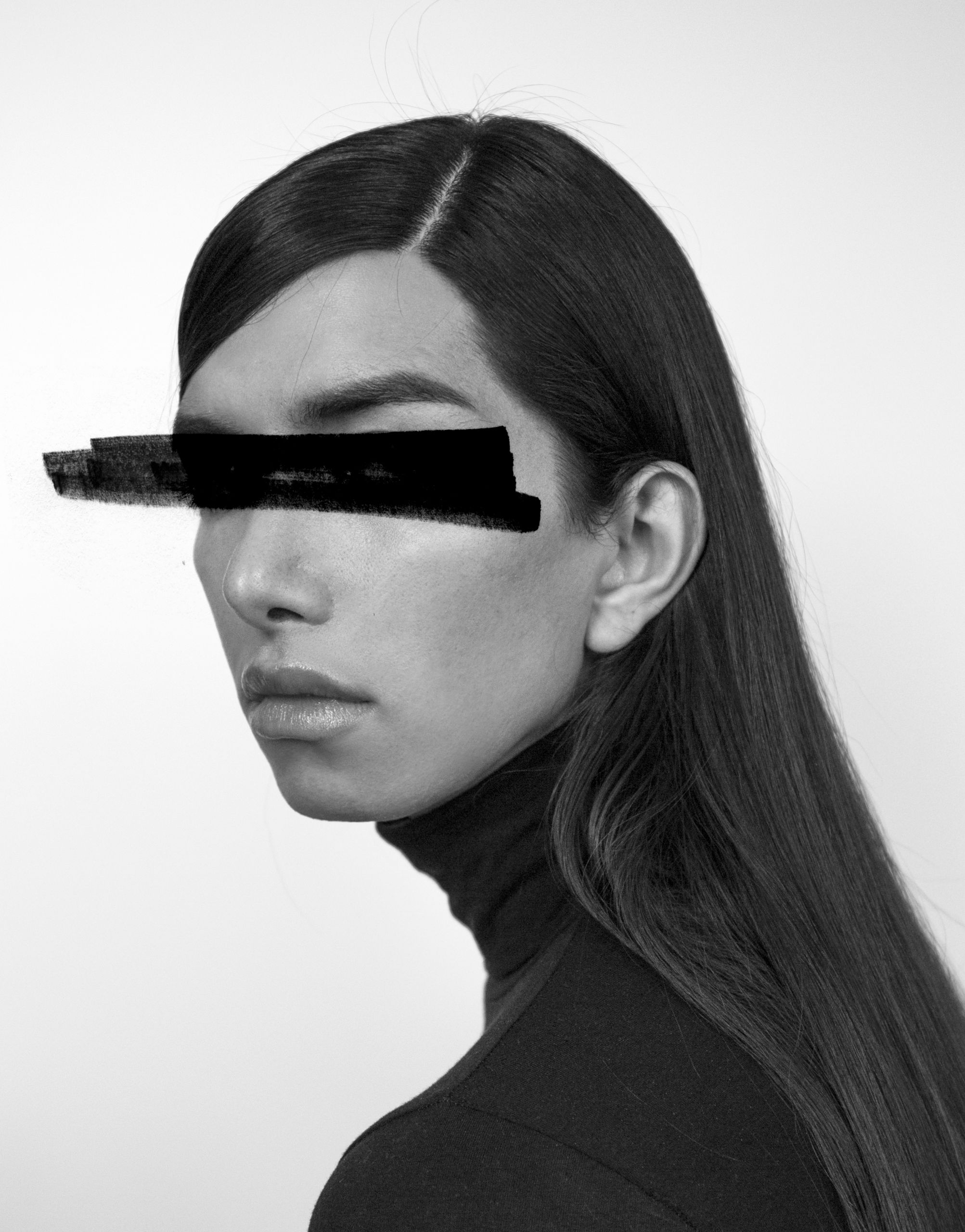 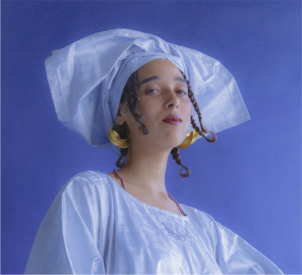