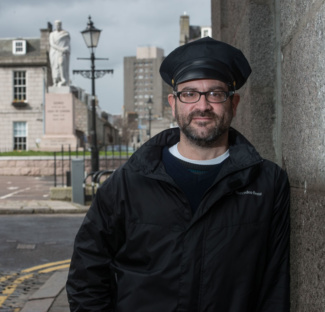 Doug Fishbone is an American artist living in London. His film and performance work is heavily influenced by the rhythms of stand-up comedy – leading one critic to call him a “stand-up conceptual artist” – and examines some of the more problematic aspects of contemporary life in an amusing and disarming way.
His 2010 film Elmina, made collaboratively in Ghana, had its world premiere at Tate Britain in 2010 and was nominated for an African Movie Academy Award in Nigeria in 2011. He is currently at work on a follow-up.
Fishbone curated Doug Fishbone’s Leisure Land Golf, a bespoke art/crazy golf course featuring some of the UK’s leading artists, at the 56th Venice Biennale in 2015, and in the same year, he collaborated with the Dulwich Picture Gallery in London, one of the nation’s most prestigious Old Masters collections, on a solo project involving switching one of the Gallery’s masterpieces with a replica made in China. In 2018 he was commissioned by the European Media Art Platform, funded by the EU to create a major public art work in Halle, Germany.
He has performed at many major institutions, including the Hayward Gallery, ICA London, the Southbank Centre and the Royal Academy.
dougfishbone.com