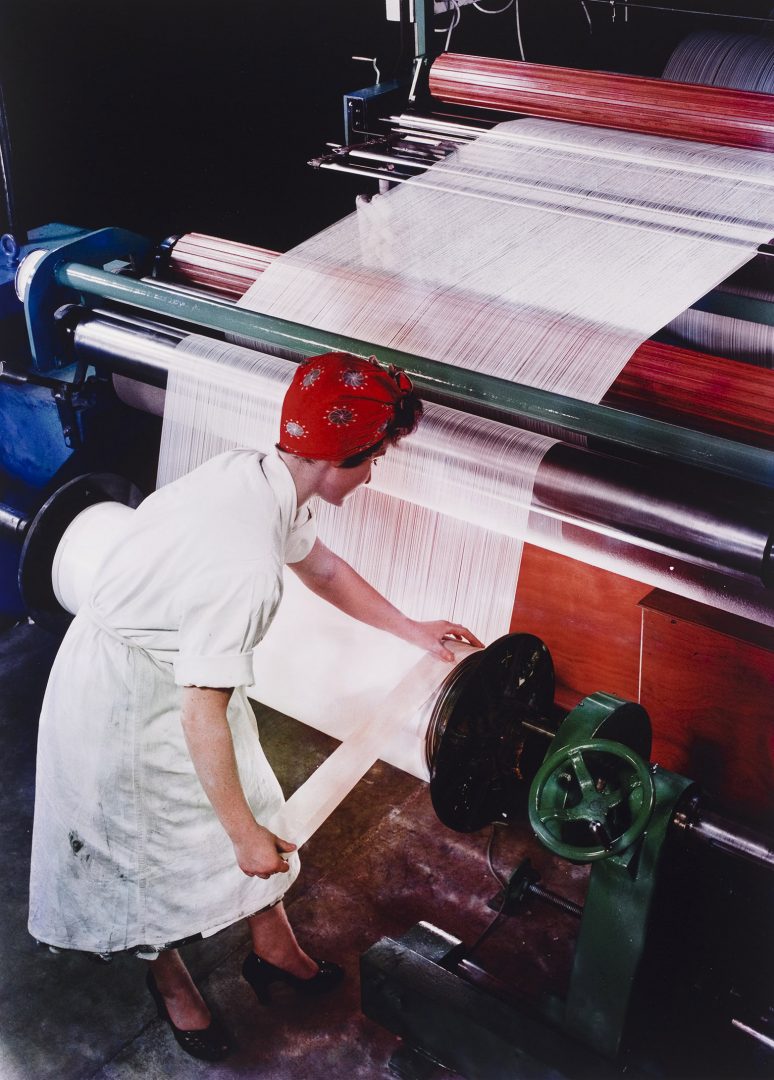 Maurice Broomfield (1916-2010) made some of the most spectacular photographs of British industry, showing skilled men and women proudly at work in factories throughout the UK. His photographs made in the 1950s and 1960s reveal a workforce in an era of rapid transition, depicting the remnants of the nineteenth-century’s industrial revolution alongside emerging modern technologies.

From shipyards to papermills, textiles to food production, and chemical plants to car manufacture, Broomfield emphasized the heroic, sublime, futuristic and sometimes surreal qualities of industry. His work chimes with Prime Minister Harold Wilson’s landmark 1963 ‘white heat’ of British technologies speech, describing, ‘a time of such rapid scientific change that our children are accepting as part of their everyday life things which would have been dismissed as science fiction a few years ago’. Broomfield’s photographs are not only a valuable record of factory environments at an important historical moment but also a testament to the communities of workers and a way of life that has now largely vanished.

Maurice Broomfield was born to a working-class family in Draycott, Derbyshire. After leaving school at the age of 15, his love of machines led him to work initially as a lathe operator at the Rolls Royce factory in Derby. He attended Derby Art College in the evenings, transitioned to working in advertising and photography, and rapidly earned the position as Britain’s premier industrial photographer. Broomfield drew visual inspiration from the eighteenth-century paintings of Joseph Wright ‘Of Derby’ and modernist photography from the German Bauhaus design schools. His pictures are meticulously composed, dramatically lit and show empathy for his subjects borne out of personal experience of factory labour.

Most of Broomfield’s photographs were commissioned to be published in company reports, but he also selected many to be printed at large scale for exhibitions. This show re-examines his work by combining a selection of his exhibition prints alongside contextual press cuttings, publications and contact prints. The contact prints have never been displayed before and reveal the ‘outtakes’ and edits leading to the final choice. Broomfield’s images remain relevant today, prompting questions about the legacy of British industry, with digital technologies replacing manual labour and the UK entering an uncertain economic future in relation to Europe.

The selection is drawn primarily from Broomfield’s archive housed at the Victoria and Albert Museum, London, with additions from the permanent collection of Derby Museum and Art Gallery. It is curated by Martin Barnes, V&A Senior Curator of Photographs. A fascinating selection of Broomfield’s original cameras complement the photographs and are on loan from his son, the internationally acclaimed documentary filmmaker Nick Broomfield.

On Friday 15 March at 12.00pm Martin Barnes will give a guided talk of the show in the gallery, looking at Broomfield’s finished exhibition photographs and his previously unseen contact sheets that reveal his working processes. To book your ticket click here.

Martin Barnes will also be giving a talk about Maurice Broomfield’s photography at the FORMAT19 Conference on Friday 15th March at 17.00pm. To book tickets to attend the conference click here.